The State of Malkia’s Pride-N-Prose

Like many small PR firms, Malkia’s Pride-N-Prose is consistently reinventing itself to reflect the PR industry’s “transformation over the past five years, a result of digital media’s disruption of traditional communications channels.”

For an in-depth look into the current state of other PR firms as well as the overall industry, check out the follow infographic “PR Is Now” from PR Daily News.

A New Study: Women Continue to Conquer the PR Industry and Why

When I was interviewed for one of my first jobs as a communications associate at a Maryland-based PR firm, I found it odd that the interview panel was filled with all women. And upon landing the job, I discovered that the small firm of approximately 100 workers employed roughly 30 men with only one working in the PR division.

But for more proof that women are dominating the PR industry, all that you have to do is go to a major brand’s website and look up the public relations director or specialist, chances are you will find a woman listed. And when you see a spokesperson for a company being interviewed by a reporter on TV, it’s usually the same gender. So why does the PR industry attract so many women? I decided to do a little research on the topic and what I found was interesting.

The Glitz and Grime of PR

Throughout my 10-year career working in both the public and private sectors, most of my bosses, co-workers or the people that I managed were women. Today, as the owner of a Baltimore/District of Columbia-based PR firm and a media trainer, I am often hired to train spokespeople to become better communicators. And my clients are typically women.

Needless to say, I always wondered why I found myself surrounded by other women. That’s not to say that I am not all for “sisterhood” and women climbing the ranks of any industry. I am also a very strong advocate for diversity and the various points of view and great ideas that comes when a company actively recruits and maintains a diverse workforce. However, I have always been a little curious: why are so many women choosing to enter the PR arena?

According to a new study, over 80 percent of the PR industry is dominated by women. When it comes to the industry’s largest professional association and the study’s authors, Public Relations Society of America (PRSA), over 70 percent or 21,000 members also are women. Well I have been a member of PRSA since I started my first PR job.

In college, however, I was determined to become a hard-news reporter who would one day change the world. So I majored in journalism, wrote for the school newspaper and completed a few internships at local newspapers. After college, I even landed a job at one. But a few years later, I had decided to step over enemy lines after becoming increasingly bored with covering yet another grand-opening for a new grocery store or bakery. And I thought that PR would be more exciting. According to Olga Khazan, a staff writer for The Atlantic, who interviewed a few PR specialists, there are a lot of women in the industry who share the same sediment.

“I think a lot of younger women go into PR because they think they’re going to be the glamorous Samantha Jones from Sex and the City where you’re opening up restaurants and promoting hot new clubs,” Shannon Stubo, vice president of corporate communications at LinkedIn, told Khazan.

Throughout my career, I have found that the profession does offer a lot of glitzy moments. But depending on the firm or company; and whether it’s the private or public sector, I must admit that I have found myself often immersed in a little grime too. Brenda Wrigley, chair of the PR department at Syracuse University, told MediaBistro.com that she believes that more women hold PR jobs because “… skills like writing, presentation, and event planning are right up their alley”.

On the other hand, Arik Hanson, the principal of ACH Communications, offered a variety of interesting hypotheses about why there are more women and very little men working in the PR industry, including the higher salaries offered in other male-dominated professions. Hanson’s theory encouraged me, for obvious reasons, to investigate further.

Women vs. Men in PR

The idea that men still earn more money than women in a field that women dominate left my feathers a little ruffled. So I did a little more research and found: public relations specialists earned a median wage of $54, 170 annually in 2012, according to the Bureau of Labor Statistics (BLS). For entry-level women, says the BLS, it goes up slightly to an average of $55,000, while their male counterparts earned over $20,000 more.

The overall starting salary for a PR specialist with one to five years of experience working in the public sector earned anywhere from over $35,000 to $60,000; and those with more than five years of experience can expect a starting salary of between $59, 000 and $82, 000, says Robert Half International, a global staffing firm. However, the vice president of a PR firm can earn $110,000 to over $185,000 annually with 80 percent of men holding these top positions. Needless to say, I was extremely bothered by these statistics.

Addition theories that Hanson discussed included how the media stereotypes women in PR industry; and the fact that men, especially journalists, simply can’t wrap their hands around what the field entails. However, the most thought-provoking one was his final theory: that it’s a “generational issue”.

“Sons grow up watching their fathers,” said Hanson. “Many fathers work in industries like finance, engineering, construction and the like.”

In other words, men tend to become more like their fathers than their mothers who typically work in the PR industry. This theory does ring true. However, PR jobs are poised for signification growth—by over 10 percent annually, while the journalism industry continues to dwindle. And “PR people now outnumber journalists three to one,” says Khazan. As a result, I think that many women in the PR industry will start to see their daughters and sons following in their footsteps instead of the father’s.

As for me, I don’t have any regrets about my decision to move from a short stint in journalism to a long-lasting career in PR. Besides, I have enjoyed and learned so much, over the years, from working with a bunch of creative and very talented women.

Why are there so few men in PR?

Why Are There So Many Women in Public Relations?

The starting salary for a PR specialist is …

Starting Salaries to Rise in 2012 as Hiring Gets Tougher

Crisis Management: Why YOU should become a follower?

I am really looking forward to the next Public Relations Society of America’s (PRSA) annual conference. The networking, parties, and even the lunch menus are always great. But as a certified media trainer, I am particularly interested in what examples the speakers will use for crisis management case studies and best practices.

The most recent faux pas in crisis management can be found with the rollout of the new Affordable Health Care Act website. According to POLITICO, PR firms “… with clients in industries ranging from health care to electronics, published a guide titled “Obamacare and Health Insurance Exchanges: A PR Makeover’’ with tips large and small – from holding more news conferences to creating an infographic explaining the benefits of the new law — for what the White House should have done to tamp down the fallout.” 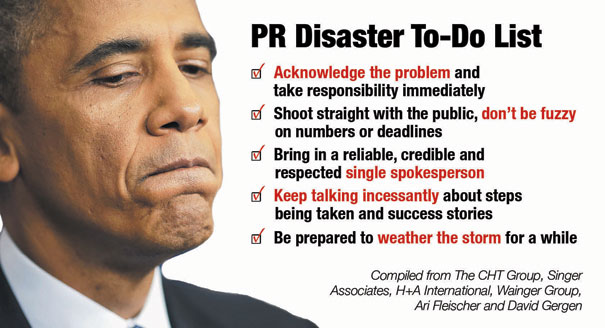 Like many PR managers, I still analyze my first crisis. It was in 2005 when I was the newly promoted communications chief for a local government agency. While I don’t waste any time (or will I waste any space in this post) scrutinizing every misstep, I do use it as a great case study when training or advising other managers of what not to do. I also share with them the most important lessons that I learned from attending a host of PR workshops and conferences. One of those lessons came from one of PR’s pioneers in crisis management, Mr. James E. Lukaszewski who has personally counseled thousands of executives representing the government, military and defense, agriculture, financial, health care, and telecommunications industries.

In 2006, I attended one of PRSA’s annual conferences and was very impressed with Mr. Lukaszewski. I was especially impressed with his experience with helping to prepare spokespersons for crucial public appearances on news outlets like 20-20, 60 Minutes, Dateline NBC, and Nightline. I couldn’t wait to see a spokesperson that I had personally trained succinctly communicating each message point; and successfully bridging to the next one, while avoiding those horrible non-verbal cues. As a result of my 2005 crisis, I was determined to emulate Mr. Lukaszewski’s ‘e911’ culture by making sure that we [my organization] were prepared by pro-actively reducing reputation risk. And if and when a crisis occurred, we [my organization] would be prepared to respond rapidly.

During a crisis, Lukaszewski says:  “The first thing that you should remember during a crisis is to tell it all, tell it first and tell the truth.”

I have learned—through the over seven years of managing crises— that it is always best when a mistake has been made to admit it up front, and begin doing whatever is possible to re-establish credibility and confidence with your internal and external stakeholders. It is just a suggestion; but other PR managers may do well to follow.

According to the Public Relations Society of America, skillful media training is always in vogue. Spokespeople always need to be prepared to speak strategically, knowledgeably and succinctly. However, one of the greatest challenges faced by media trainers is helping the company spokesperson to eliminate those annoying “fillers”.

Filler words like “um” often get in the way of those all-important message points or pieces of essential information. After all, a spokesperson’s primary goal is to introduce, deliver and reinforce his or her key message points. Some of the best public speakers would never be caught saying words such as “um,” “uh,” “well,” “so,” “you know,” “er,” and “like”. If you are the company spokesperson, you shouldn’t be caught saying them either. Once you learn to speak without the fillers, you increase the odds of your listeners’ ability to focus solely on your message.